Restored in 2020 by the Filmoteca de Catalunya

Sometimes you watch a film and wonder how you were able to live without knowing it for so long. These special films you wish had arrived in your life sooner. ABOUT SOME MEANINGLESS EVENTS was one of those revelatory experiences, except in this case the reason why the film and I hadn't crossed paths before was a crushing 45-year long disappearance.

Moroccan pioneer Mostafa Derkaoui's debut feature was censored right after its first ever public showing in 1975, its exhibition subsequently forbidden. In 2015, the 16mm negative was rediscovered at the Filmoteca de Catalunya, which conducted a restoration allowing for the film to have not a second life but a first one, to exist and be seen—to connect with an audience at last.

Beautifully and mysteriously titled, this is a restless film, full of urgency and inquiry. It oozes with necessity and desire for change, which makes its forced vanishing all the more tragic, but its resurfacing all the more stubborn. As a movie that poses big and uncomfortable questions about filmmaking and cinema at large, some of which are still difficult to answer four decades later, ABOUT SOME MEANINGLESS EVENTS resonates with exhilarating force.

While it may make many feel the world hasn’t changed much, that inequality and social injustice keep very much defining our present, the film’s non-conformist nature, aesthetic pursuit, and political ebullience have also survived all these years in the dark and feel more poignant, vibrant and alive than ever. This endurance, this reluctance to be suppressed, also contribute to cement its unknown masterpiece status. This film is here to stay, and that is not a meaningless event. 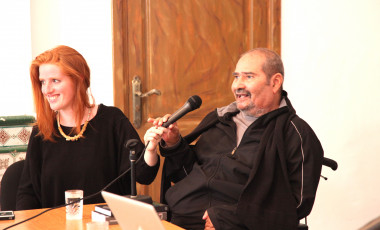 Curator and independent researcher, Lea Morin is co-founder and director of the Atelier de l’Observatoire (Art and Research) in Casablanca/Morocco. A graduate of FEMIS (Ecole Nationale Supérieure des Métiers de l’Image et du Son, Paris/France), she was formerly programmer and director of the Cinémathèque de Tanger. Her practice primarily focuses on the conceptualisation and realisation of shared spaces for research, taking the form of workshops, seminars, exhibitions, screenings, publications, film restoration, preservation projects and educational programs. Her research explores archives, history and film heritage from North Africa, seeking to trace possible historiographies based on the absent, disappeared or forgotten.